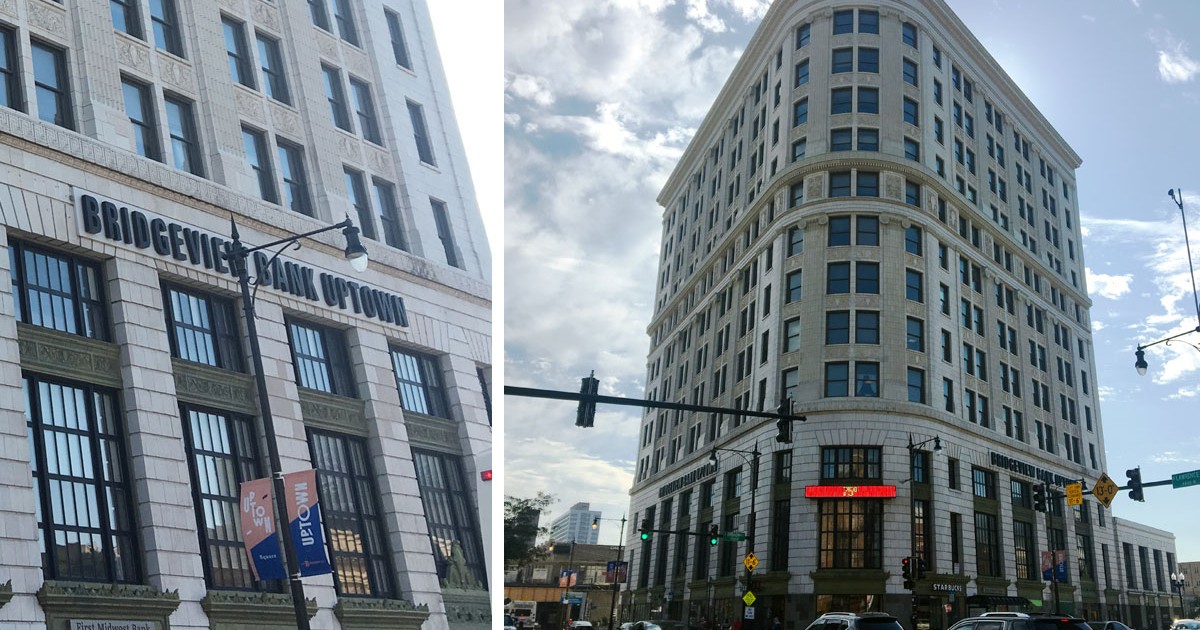 Uptown Bridgeview Bank Building will no longer be a service center

Built in 1924 and designed by the same architects who were originally Chicago’s downtown glamorous Drake and Blackstone hotels, the iconic Bridgeview Bank building in Uptown stands out with its unique elegantly rounded triangular footprint at the intersection of Broadway and Lawrence Avenue.

But the 12-story neoclassical gem also stands out because it has become a central part of Uptown’s vast network of social services. There, countless low-income residents and immigrants have found help from various agencies under one roof.

Bringing these vendors into the Bridgeview Bank building was the vision of Suellen Long, who was hired many years ago to refurbish the largely empty and dilapidated building at a time when Uptown was struggling with poverty and gangs.

“It seemed to me that our clients were going to be nonprofits, because that’s who was working in the area and what we needed in the area,” Long said. “So I just made that decision and went and got the tenants.”

Today, the building is home to organizations such as Illinois Action for Children, RefugeeOne, Asian Human Services, and Asian Americans Advancing Justice.

But this chapter is coming to an end as the new owner of the building plans to turn it into apartments. Agencies that have benefited from operating under one roof are now wondering where they can afford to go, and whether they are still needed in the gentrifying lakeside neighborhood of Uptown.

In April, Cedar Street Companies added the Bridgeview Bank building to its extensive Chicago real estate portfolio, when it purchased the property from First Midwest Bank. Cedar Street, which is based in Uptown, informed tenants that they must leave the building at the end of their lease, before 2021.

“The time is terrible for us as an organization,” said Melineh Kano, executive director of RefugeeOne, Illinois’ largest refugee resettlement organization.

RefugeeOne began renting offices in the building in 1985 to be close to the refugees who flocked to Uptown from Vietnam, Cambodia, and then Bosnia and Iraq. Even though refugees have been deprived of apartments in the gentrifying neighborhood over the years, the agency has remained in the Bridgeview Bank building. This is because rent was kept affordable there and elected officials and other neighborhood service providers were strong supporters.

Kano said she was told RefugeeOne is expected to vacate the building when its lease ends in September 2020. The problem, Kano said, is uncertainty surrounding the organization’s funding. Refugee services in the United States have faced severe cuts from the federal government under President Donald Trump. Kano said she had to lay off staff and cut programs. If Trump is re-elected, Kano expects more lean years. She said a Democratic president could restore funding.

“I reached out my hand to [Cedar Street] because I wanted to see if there was a way to extend our lease for another year, so we could wait until after the presidential election,” Kano said. “But unfortunately that’s not a possibility.”

Cedar Street CEO Alex Samoylovich declined to comment for this story. A company statement said “a number of existing tenants may … remain in the building,” but it did not include further details.

From his one-story conference room in Kano, Andy Kang can see another historic building Cedar Street bought in 2013. Kang, executive director of Asian Americans Advancing Justice Chicago, watched as the Lawrence House transformed from housing of last resort – for people on fixed incomes, with bad credit or criminal history – to expensive “micro-unit” apartments for young professionals. Cedar Street has executed similar projects with other buildings in Uptown, including a vacant Jewish synagogue, and ongoing renovations to a building where the Illinois Department of Social Services once served North Side residents.

“I’m angry that our city leaders continue to have no plan for how we make sure gentrification doesn’t also mean displacement,” Kang said. “I refuse to accept the idea that these are just unstoppable economic forces and that there is nothing that can be done to really put in place policies that allow for mixed-income neighborhoods.”

Kang said his organization has had a busy schedule in recent years, pushing for local policies that protect and expand immigrant rights. But now that his agency itself is relocated, he said it’s time to tackle gentrification in immigrant neighborhoods. He said Pilsen and Logan Square are examples of how, left unchecked, immigrant residents often end up being excluded from the very neighborhoods they made attractive in the first place.

“I think that’s an issue that’s not going away for a lot of our immigrant communities, and it’s probably an issue that we need to pay more attention to,” he said.

But some are optimistic about the next chapter of the Bridgeview Bank building.

Martin Sorge, executive director of Uptown United and Business Partners, said that even if the agencies had to leave the building, Uptown would remain a welcoming and diverse neighborhood. He added that he was pleased that a company rooted in the community, and with a good track record of adaptive reuse of historic buildings, was the new owner.

“I think [Cedar Street was] best to understand the context of Uptown and who is here,” Sorge said. “From our perspective, they’ve also really supported a lot of small local businesses.”

Aldus. 46th Ward James Cappleman did not immediately comment on the upcoming changes to his ward building.

The move forces agencies to consider whether they’re still needed in a neighborhood where median incomes grew 45% between 1980 and 2017. Craig Maki, CEO of Asian Human Services, which has offices on three floors of the building, said his agency has been aware that the need for their services has shifted to other parts of the city.

“We were already looking at alternative solutions for where should we be and what our physical locations should look like to better serve the customers we serve, who no longer live primarily in Uptown,” Maki said.

Maki said he dreams of moving to another building, much like the Bridgeview Bank building, where multiple service providers can work together, across floors and specialties, to help customers who come to them. with a variety of needs. He said it’s been difficult to find funding for such a model for nonprofits, but in the long run it can save money and have better results for clients.

“Our only choice is how to become more effective and efficient in delivering… high quality services? Maki said. “We believe that a physical location designed in this way is one way to achieve this.”

Many agencies are now beginning to seek space in neighborhoods where their low-income and immigrant clients have moved, such as West Ridge, Albany Park and Hermosa. Still, Kano said it was hard to find something affordable. And she said the loss of the Bridgeview Bank building as a service agency headquarters was more than a change in real estate.

“We are really losing a community that was created in Uptown to help marginalized people,” she said. “And it’s going to be very sad to see.”

Odette Yousef is a reporter in WBEZ’s Race, Class and Communities desk. Am here @oyousef.

Everything investors need to know about Investigational New Drug Submissions