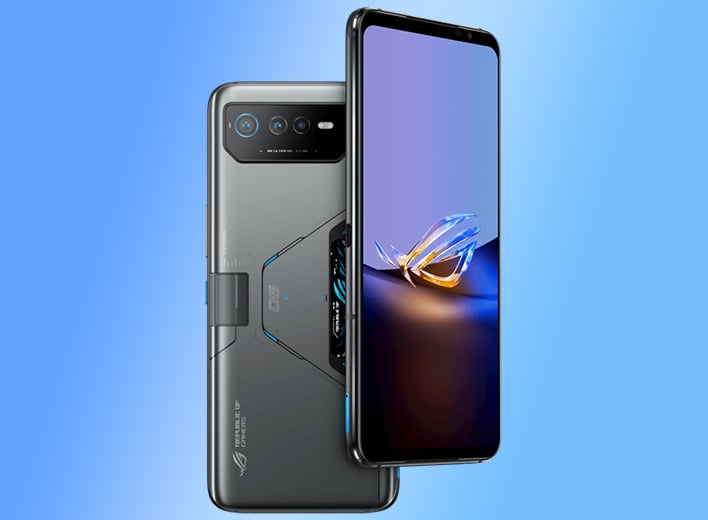 Mobile gaming is becoming more demanding and competitive with titles like Fortnite and Call of Duty coming to smartphones. This has led to the expansion of the gaming phone niche in recent years with names like Red Magic and Black Shark appearing on the scene. Leave it to ASUS and its ROG brand to set the benchmark, though. The company’s latest ROG Phone 6D Ultimate amps up the cooling system and replaces a new processor.

This device doesn’t completely deviate from ASUS’ current lineup – it just has a few notable differences from the ROG Phone 6 Pro. For one thing, this device is only available in the new Space Gray colorway. The “D” in the name also indicates a silicon change. Rather than a Snapdragon 8+ Gen 1 chip, this version of the phone has a MediaTek Dimensity 9000+ processor. This chip is also paired with faster LPDDR5x memory. The MediaTek chip’s GPU is slightly less powerful than Qualcomm’s, but the CPU is around 10% faster.

The biggest change is undoubtedly the new “AeroActive Portal” cooling system, which features a small heat vent on the back of the phone. When you attach the AeroActive Cooler 6 accessory, the door opens, forming an air channel that directs some of the fan’s capacity (1000cc per second) through the phone body and out through the heatsink . ASUS says this helps the phone stay cool and avoid throttling. ASUS has conducted internal tests that show the cooler can lower temperatures by 3.4 degrees Celsius compared to the ROG Phone 6 cooling solution.

The cooling flap is intended to remain closed when the AeroActive is not attached. However, you can temporarily open it in the settings for cleaning purposes. The phone has drop detection similar to the Zenfone 6 with its flip camera – if you drop the phone it’s smart enough to close the cooling flap to prevent damage. The mechanism is said to have been tested for 40,000 reversals.

The rest of the phone is a carbon copy of the ROG Phone 6 Pro with a 6.78-inch 165Hz OLED, 512GB of storage, and a 6,000mAh battery. There are also tactile shoulder buttons for gaming and a rear-facing ROG Vision display.

This phone will launch soon in Europe at €1,399 (around $1,400) for the Ultimate bundle that comes with AeroActive Cooler. The ROG Phone 6D—without Ultimate—is also launching, starting at €949 (about $945). The ROG Phone 6D mirrors the regular ROG Phone 6 with just an RGB logo instead of the fancy display on the back. There are no immediate plans to bring these devices to the United States.